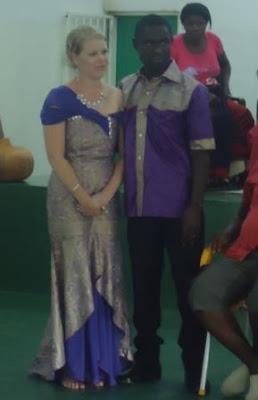 So, part 2 of 3 of the marriage process.

My bridal shower was to take the more modest place of a kitchen party, an important pre-marriage event, that for some couples actually constitutes the marriage itself, traditionally if not legally.
Basically, lots of women come along and bring the bride everything she needs to set up her kitchen, including a fridge, oven etc. It is a very important event for the bride.

I didn’t want such a big event, ovens being hard to pack in a suitcase, so I arranged to have a bridal shower. I wanted to have a nice event where I could thank and celebrate with the women I wasn’t able to invite to the wedding. As I have written before, things morphed as a committee took charge, and the event turned out rather differently to what I had anticipated.

Atkins and I had ourselves all ready, with our matching outfits (way less dorky than it sounds). (If I’m being honest, the excuse to get a really Zambian dress made was a strong motivating factor in having the event. I was pleased with the results – see photos.)

We drove across town to pick up his sisters and my wana chimbusha (the woman who ‘prepared’ me for marriage through some interesting tutorials). At this stage things were about 2 hours behind schedule, which didn’t bother anyone except me, and Atkins. Poor thing – my regard for punctuality must be rubbing off him.

Food was prepared, make-up applied, all without power. I was quite pleased with my make-up efforts. Done in a very dark room, I managed to avoid a Bridget Jones-ish blusher incident.
We headed down to the venue, which had been decorated very nicely. We were not the only ones behind time. I finally entered the hall at 4pm, 3 hours after the time the invitations had naively stated the event would begin.

My entrance was a new experience for me. Myself, my wana chimbusha and another woman were covered in a chitenge and crawled in on our knees, to the accompaniment of drumming. I was then kept covered until Atkins arrived to unveil me. That bit was surprisingly fun, and felt less demeaning that I had expected. I felt like a really nice Christmas present.

I then had to kneel before my future husband to show my submission to him. Not my favourite part, and only agreed to after he promised to do the same for me at our New Zealand wedding, and thereby set himself apart as an extraordinary Zambian male. Gifts were also presented to my Zambian ‘mother’ and representatives of Atkins’ family. We grabbed a quick hug and kiss, and he was then escorted out.

It was again a female-only zone. People ate, there was some entertainment, I was asked to dance for everyone and was then returned to my platform. I wanted to dance more, but apparently it was not appropriate for me to do this in front of future in-laws (in case it made them think about what Atkins and I would be getting up to in the bedroom). I acquiesced, but no such restraint will be shown at the wedding!

People soon began drifting off, and we too returned home. No reunion with Atkins yet though – I was sequestered away in the neighbour’s house while my wana chimbusha prepared for a final ceremony.
When she was ready, I was led to my bedroom, where Atkins was waiting with my wana chimbusha. I knew that we were going to be briefed on the physical aspect of marriage, so was rather concerned as to the role the cooked chicken in the middle of the room was to play. Luckily, it turned out just to be another reassurance to Atkins that he will not starve at the hands of his new wife.

Some rather intriguing instructions on personal hygiene and other matters followed. I was presented with some needles for reattaching any errant buttons of Atkins’ and warned that one must never borrow needles or salt from anyone, because these are potent vessels for witchcraft.

By now I was beginning to slip into culture shock, but wana chimbusha was finished. The house emptied out, and we were alone, kind of married. My first words to my new husband were “darling, I really don’t want to shave your armpits like she said I should.” His response? “Sweetheart, I can’t think of anything worse.” And that’s why I’m marrying him!

All said and done, it was a fascinating experience, and I am so glad I did it because it meant a lot to Atkins’ community, and reassured the people around us that I respect Atkins’ culture, and want to be part of it. Some parts of the ceremony were really moving, such as both being formally accepted by our respective in-laws. Other parts were really fun, like the dancing. Some parts, like the kneeling, I fundamentally balked at, but accepted that not doing it would ostracise us both, and would also be too insignificant a gesture to improve women’s status here. Overall, I was humbled that all these people I barely, or even don’t know, were willing to open up their culture for me, and spend hours organising this event.

I feel that participating in both chilanga mulilo and the bridal shower has helped Atkins and I prepare for marriage. After each ceremony we have felt a little more married, and the experience has brought us closer, forcing us to discuss things we probably wouldn’t have otherwise. So while there are aspects of both ceremonies I would change, I can also see the mental and emotional benefits of thoroughly preparing for, and commemorating, an event as significant as a marriage.
Posted by Rachel at 05:25 1 comment:

Am I really marrying him?

This is what happens when you remember to pack a change of clothes for after work, but not a change of footwear.... 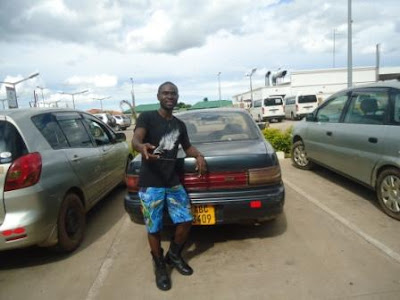 Most women here wear wigs or weaves, in the same way that most women in New Zealand dye their hair in some way.

This is because their natural hair doesn't grow very long, and is quite hard to manage.

Here is a photo of a shop in the market where you can go to buy your next hair style, and even have it 'installed' while you sit outside. 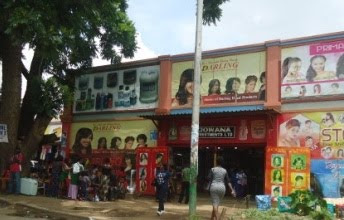 Some pictures from the chilanga mulilo ceremony, a traditional ceremony either before a marriage, or even as the marriage, where the bride and her female friends and relatives make a big meal for the groom's friends and family.

Turned out a bit bigger then we anticipated, and with more beer and dancing. 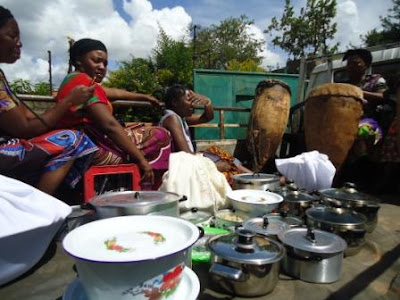 A beginner’s guide to a Zambian wedding

A wedding can take many forms here. There are lots of different possible ceremonies and events. Somehow we have ended up doing ALL of them.

Amongst it all there is a lot of gift and money exchanging, speeches, dancing and eating. The overall intention seems to be to prepare the bride and groom, and also to create trust and respect between the two families. I think this is really nice, although I have strongly disagreed with a lot of the advice I have been given (the real low point being that I need to be sexually available to my husband any time and anyhow, otherwise he will find himself a girlfriend). NB: this is NOT true of Atkins. If it were, I would not be marrying him.

We are also both uncomfortable with the emphasis on the woman having to prove her worth through cooking and obedience, but have decided that it is important for us to experience all of this. We can still shape our marriage the way we want to, but doing all of this earns us a great deal of respect from our Zambian family and community, and gives us a real insight to the culture that we would never get otherwise.

Bana chimbusa and ba shibukombe
These are the female and male elders that myself and Atkins meet one-on-one with to be prepared for marriage. It’s not appropriate for me to share the secrets here, but for me they focused on ‘the bedroom’.

Chilanga mulilo.
This literally means ‘showing fire’. This where the woman and her family show the man’s family that she can cook, and also to show the man and his family what he will be eating in his married life. Ladies from the school I initially worked at, and some friends of theirs, very kindly did this for me. It ended up being a BIG occasion with a huge amount of food, including chicken, nshima, beans and local vegetable dishes. I contributed meatballs, macaroni cheese and lemon muffins.

Also part of the day for me was drumming and dancing, and being shown how to cook nshima. The food was taken to Atkins and his family on a truck with all the women singing and drinking beer. It was pretty epic!

Kitchen party (or in my case a slightly smaller event we are calling a bridal shower)
Traditionally, this is where the bride is given everything she needs to set up her kitchen. Details of mine to come.


Some people do the church/reception version, others do something very small and traditional. Details of ours also to come!
Posted by Rachel at 00:10 No comments:

Mango season is done now, so we have a new game.

Have you ever played horse? When on a car trip you get a point if you are the first person to see a horse and yell 'horese!'?

Well we have changed the horse to mzungu (white person). It's reallly quite fun, although can get contentious. Atkins doesn't think people from the Middle East or Asia count as mzungus so sometimes refuses to let me have my points...
Posted by Rachel at 00:10 No comments: